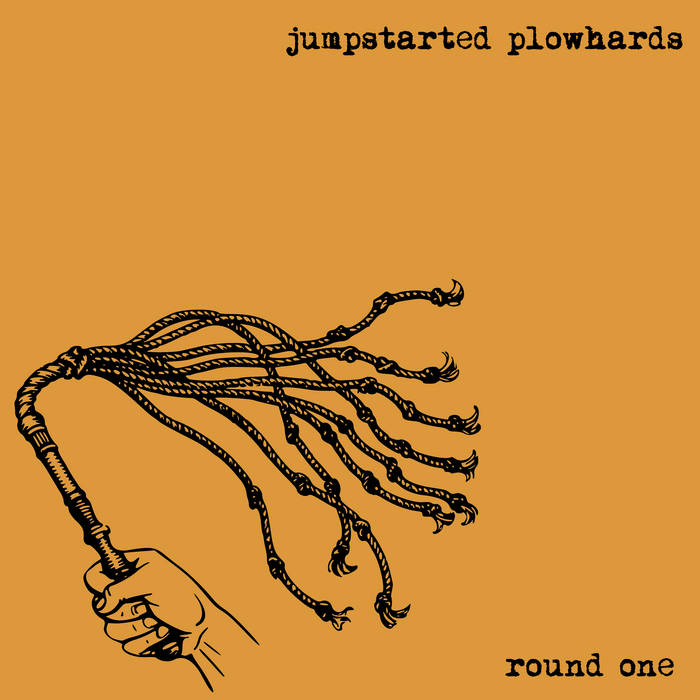 Round One is the first of series of projected releases from Jumpstarted Plowhards, a furiously rocking combo featuring bassist extraordinaire mike watt (MINUTEMEN, fIREHOSE, Stooges and countless collaborations), guitarist/singer Todd Congelliere
(Toys That Kill, F.Y.P, Underground Railroad to Candyland) and a rotating cast of drummers including George Hurley (MINUTEMEN, fIREHOSE), Patty Schemel (Hole), as well as regular watt colleagues Jerry Trebotic (secondmen) and Raul Morales (missingmen) among others. The album is being released on 45RPM 12” vinyl by Congelliere’s Recess Records October 4.

Todd and mike first met in the early 90’s when F.Y.P. shared bills with watt’s bass duo, “dos.” In 2013, mike and his secondmen released their version of Toys That Kill’s “No One” on both a split 7” with Qui and a compilation of covers of Todd’s songs. Throughout the first two decades of the 21st century, mike’s missingmen frequently did dates with the former’s Toys That Kill, and after a 2017 West Coast tour together watt proposed a collaboration. He’d supply Todd with bass parts recorded to click tracks and Congelliere would flesh out the songs with guitars and vocals and recruit different drummers to complete respective tunes.

In the Summer of 2018, Todd received a CDR with 15 selections, headed to his Clown Sound studios and got down the business feeling both excited and overwhelmed. After laying his parts, and getting watt to record spiels on two songs, Congelliere began contacting drummers. As each song started taking shape, a prospective drummer usually popped into his head. Here’re Todd’s observations of what each one brought to the sessions:

“Nick Aguilar (Neighborhood Brats, Slaughterhouse) is very versatile. I wanted some pounding and a li’l surf with ‘On The Counter’ and he pulled it off without making those desired aspects obvious.

“’The Punk Setup’ just one of the songs in the long-term project that fit George Hurley (MINUTEMEN, fIREHOSE). No one I know plays like George. Some of these I thought, ‘George or nothing’ right from the start. I changed the song a bit after I tracked him. So, he made the song better.

“Jimmy Felix (Toys That Kill) is a jungle beat pounder. ‘The Garter Snakes’ is the closest to the stuff I write with Toys That Kill so Jimmy was obvious for it.

“’Claws Break Down’ is another song that I went back and improved AFTER drum tracking. Patty Schemel (Hole) is sparse on this and it really adds to it tremendously.

“Brian Brunac (Fartbarf) is super technical but I think excels at the rock. ‘Yeah, We’re Gonna Learn To Fall’ needed rolls without overfilling. I had a drum loop on that was close to the basic idea but also terrible. I took it off and just had the click and he got it right away.

“Trevor Rounseville (Clown Sounds) loves heavy music and ‘Makin’ it All Settle Down’ is the heaviest song we got.

“Jerry Trebotic (mike watt & the secondmen) has so much hyper energy but doesn’t overdo it. It’s rare. I think he nails it. There’s even a happy accident on ‘Commie Klara‘ that anyone else would 99% for sure redo.

“Raul Morales (mike watt & the missingmen) played in my old band F.Y.P. before joining watt. “Babylon Gone” sounds nothing like my F.Y.P. songs but the chemistry is the same.”

Jumpstarted Plowhards plan to record five installments of the series before playing live.
The basic songs for Round Two are already taking shape and drummers are being lined up as of this writing with drums tracking scheduled for later this year.

Bandcamp Daily  your guide to the world of Bandcamp

Featured sounds from Fly Lo and Ahmed Idris, plus Mother Nature hops on to drop off new project